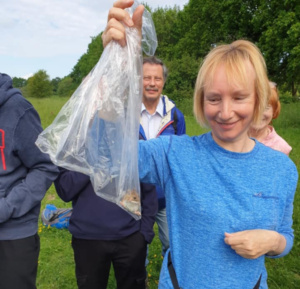 Ready to be examined

On a warm Saturday morning, approximately 20 people including 3 enthusiastic children, joined us on a small mammal event at Moor Green Lakes Nature Reserve.

Trustee Bernard had previously set 45 humane Longworth traps the night before. Bernard explained to us how the traps work and showed us how he put nesting material and food and apple in the traps so that the animals had something to eat and some moisture and a comfortable place to sleep whilst caught in the traps.

We were disappointed that the first few traps did not have any animals in them, but our patience was soon rewarded when we were delighted to find a number of small mammals in other traps.

We carefully examined them to find a nice mixture of 13 adult and juvenile male and female field and brown mice and one bank vole.

The mammals were put temporarily into plastic bags so that they could be examined. All were healthy.

The children were particularly taken with the big eyes and ears of the mice, who were all very lively especially when they were released and jumped eagerly across the grass like small kangaroos. One of them decided he would rather explore Bernard and ran all over his clothes, much to the amusement of the onlookers. 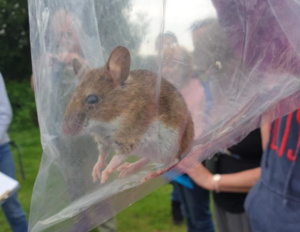 The children loved the big eyes and ears

The bank vole had other ideas, and attempted to burrow into Bernard's hand and gave him a rather nasty nip before being carefully released.

We also observed a number of lovely native wildflowers and birds - Bernard told us what they all were.

Everyone seemed to really like the event and went off happy to enjoy the rest of a nice sunny bank holiday weekend.