During the Festival, we ran a varied programme of free talks, which were all well attended. 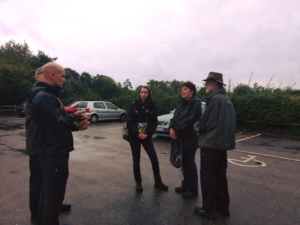 This walk and talk at Shepherd Meadows was a rare chance to get a look at some of the issues involved in managing the land along the river and a little bit of rain didn’t deter the small group of intrepid conservation enthusiasts who attended.

Shepherd Meadows is a 34-hectare site on the Berkshire and Hampshire border situated along the River Blackwater. It’s an SSSI (Site of Special Scientific Interest) because of its unimproved grassland and ancient woodland interest, and is managed through a combination of cattle grazing and cutting hay.

The walk included a discussion about managing grassland for its wildlife interest in general, as well as the different methods employed at Shepherd Meadows. It also explored issues specific to the site such as changes in the study of water, and the challenges of conservation management of valuable wildlife sites where there is a lot of of public access.

Many thanks to Rob (Biodiversity Officer) and Alex (Site Ranger) from Bracknell Forest Borough Council for a most interesting and informative session. 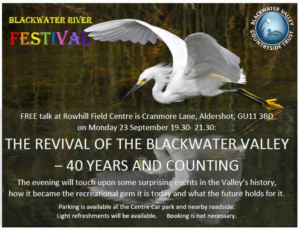 The revival of the Blackwater Valley: 40 years and counting

We finished on climate change, invasive species and the work of the Blackwater Valley Countryside Trust.

This talk was very well attended and the refreshments were much appreciated by all.

Many thanks to our friends at the Rowhill Nature Reserve Society who hosted this event. 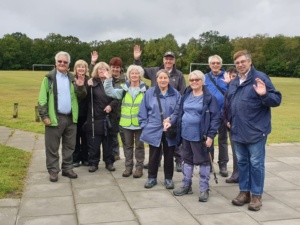 BVCT past, present and Festival

This walk started and ended at the Darby Green Centre and took in the scenic delights of Swan Lake.

One of many former gravel pits in the area, Swan Lake Park is now a picturesque walk through a wildflower meadow and around a fishing lake. This area is managed by the Blackwater Valley Countryside Partnership.

The walk lasted an hour and was just under three miles long, along well-worn paths.

10 intrepid walkers from the Walking Club braved the weather and joined us. They all enjoyed the walk despite a period of heavy rain.

Refreshments were served afterwards in the Darby Green Centre, followed by a short talk by Mike Swaddling, former Chair of the Trust entitled “BVCT – Past, Present and Festival”.

Many thanks to our friends at the Walking Club for taking care of us.