This Festival week walk was in bright sunshine starting at Southwood Woodlands, passing many buildings of interesting history including the old wind tunnel, the Basingstoke Canal and returned via some strange concrete army structures with unexplained purpose.

“Thoroughly enjoyable and lead by Paul Sanders in his popular, interesting style”

“Fabulous walk, thank you Paul for leading and those lovely people who supplied tea and cake halfway round – a really pleasant surprise” 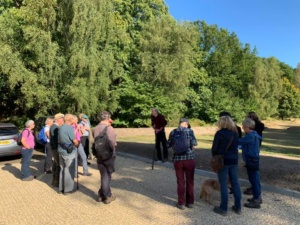 For the second time in two months I had set everyone the challenge of finding a recently created car park in a new SANG (Suitable Alternative Natural Greenspace) area. This time we were meeting at the Kennels Lane entrance to the new Southwood Country park. This 30 hectare area of acid grassland with 2.4km of new paths has been created on the old golf course site which will now allow Farnborough town centre developments to proceed.

Pleasingly the car park started to fill up with a good crowd of walkers as 10:00 approached and we set off following the newly mown paths through the now long grass of the former tees and bunkers and fairways and over streams feeding into the Cove Brook. We noted the wildflowers now re-colonising the site.

We crossed Ively road with the help of some very patient motorists and continued past the rather sad looking former club house awaiting development into a cafe or information centre. We crossed the road to enter the airfield site. This is the fourth time I have led this walk, albeit slightly different every time, but each time we see more of the old historically interesting buildings have been demolished and new bland grey ones take their place. This year it was noted that the old control tower was no longer there. 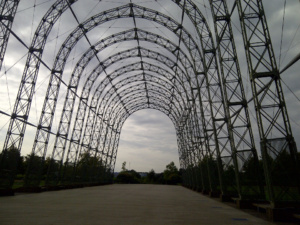 We passed under the recreated outline structure of the balloon sheds. The scale of this is impressive but the originals housed balloons such as the 122ft long Nulli Secundus, or more formally British Army Dirigible No 1. First flown on 10 September 1907, it was Britain’s first powered military aircraft and designed by Colonel James Templer who originally brought the balloon factory to this site and whose name is remembered by the name of the road we had been using since Meadow Gate roundabout. Its engine later being used to power Cody’s British Army Aeroplane No. 1. We briefly discussed this plane and the Cody tree as we passed by one of Farnborough’s most famous landmarks, the Grade II listed Black Shed hangers.

The sun was shining and we had good views across the airfield. I didn’t let on that our refreshments waited for us at exactly the far end of the main runway. It looked so far away.

Exiting the airfield at the Queens gate we discussed the history of the old days of pilot training as remembered by ETPS road and the old hostel and its most famous resident Laurence of Arabia before his adventures began. 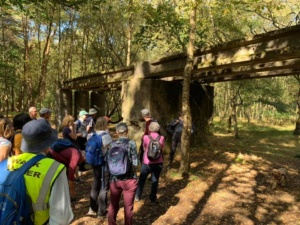 As we walked down Shoe Lane we stopped to view the large grave of five famous army horses just on the edge of the army golf course and then carried on down the quiet road to the Basingstoke Canal. We walked a couple of miles along the towpath before climbing up some steps recently installed by the Blackwater Valley volunteers to meet up with Angus and Marilyn who were dispensing teas and cakes from their “yellow wheelbarrow cafe”.

We stood on the mound, or sat on the benches, enjoying our drinks as several aircraft gave us a close look at their departures. We had covered 5.3 miles out of our 9.3 mile route.

Continuing along the towpath we now got some shade from the very welcome, but hot sun as we turned off to follow the Gelvert stream as it heads north through Pondtail into Fleet Pond. Turning to the east we could see the developments on the old Pyestock site with just one of the old buildings still standing. We crossed into the next wooded area which is slated to be the SANG for Hartland Park. We stopped to look at the curious bullet riddled concrete structures in the wood then crossed Kennels Lane to walk across the football pitches before entering Southwood Woodland and returning to the car park.

I hope everyone enjoyed the walk and found something interesting or new and thank you for keeping me company. Hope to see you in October!