This project was completed in 2017 although Blackwater Valley rangers continue to install new stumperies when sites and materials come conveniently to hand.

Stag Beetles are a priority species for the UK. We are lucky to have a good population in the Valley and we wanted to ensure that this remains so in the future.

Stag beetles need dead wood to lay their eggs and their larvae feed on the rotting wood. The larvae are long lived but the adults do not move far from where they emerge – males can fly up to 500m but most females travel no more than 20m. This is becoming a problem as valuable habitats are being fragmented and lost to wildlife as parks and gardens are tidied up.

In 2016 the Trust appealed for funds to create a network of habitats throughout the Valley so stag beetle populations do not become isolated. We aimed to: 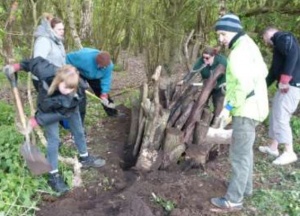 14 existing stumperies were located. Volunteer groups includeing Brickfields, Snaky Lane, Tices Meadow & 1st Owlsmoor Scouts, and BVCP Rangers installed a further 50 stumperies during 2016 and 2017 using fallen wood available on the various sites. Long-lasting information signs were placed by stumperies close to public paths to explain what they were and why they were important.

Now the stumperies are established they are also developing into really good habitats for fungi that thrive on rotting wood such as the hairy curtain crust and the burgundy drop bonnet.