It seemed to me like it had been raining constantly for two weeks when we met under a spinney of oaks at Swallowfield Park on Saturday morning. But for a change the sun was shining promising a fine day for walking.

This park was first recorded in 1316 and the home to many noble families including being owned by Thomas Pitt, grandfather of Pitt the elder. The first thing we noticed was a fine display of a ring of large mushrooms in a circle around one of the mature oak trees. These, possibly Parasol Mushrooms, were at least twelve inches tall and were all left untouched. Later in the day, several other people arrived there to photograph them.

We set off on the footpath around the large fields and passed the copse named as “Cuckoo Pen” before taking the quiet Nutbeam Lane and the now very narrow path to descend to the Blackwater River. The recent rain had raised the water level to make a fine display with many geese in the field on the far bank. The confluence of the Whitewater and Blackwater rivers was clearly visible.

Crossing the river near Thatcher’s Ford, where the Roman road, the Devil’s Highway, meets the river on its passage from London to Silchester, we followed the path around a field which took us away from the river and into Bramshill Plantation. We followed the wide forestry tracks past a large pond which was almost unnoticed as the vegetation on the banks has grown profusely since we were there last year – I think I know several volunteers who would willingly cut this down if ever the Forestry Commision wished to, Continuing alongside areas of dense young pines and then areas of thinner more mature trees before we followed the only marked footpath in the forest to its western edge. 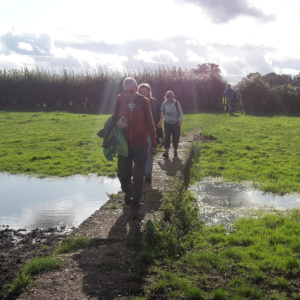 We left the forest behind to take the quiet lane to Springwater Farm and through the paddocks to start to turn north. Here at a very picturesque end of the field Angus was waiting for us with his yellow wheelbarrow containing hot drinks and cakes for us.

Suitably refreshed we followed the bridleway to the wooden bridge over the Whitewater River and then past Risley Mill. The mill which was the lowest of eight mills on the Whitewater river and of late eighteen century origin. It ceased operation when the mechanism failed in 1910 and is now a private home. Then with the grounds of Wellington Country Park on our left we entered the newly created SANG on the water meadows on our right. These have been named the Wellesley Water Meadow and having areas both named Wellesley in the south of the Blackwater Valley and now in the north will I’m sure not cause any confusion to anyone! Anyway we strolled around the perimeter of the meadows on the mowed paths which again took us down to the Whitewater, unfortunately there was no sign of the kingfisher that had been spotted there the previous week but red kites did fly overhead.

We returned to the Devil’s Highway to head further west before crossing fields and quiet lanes before returning to Church Lane at Salters footbridge where the Blackwater temporarily splits into two streams. We then had a quick look around the churchyard of the thirteenth century All Saints church. Our cars were parked just at the exit of the churchyard near the grave of Mary Mitford the author of “Our Village”, based upon life in nearby Three Mile Cross before she moved to Swallowfield. We had finished our seven miles at exactly one o’clock.

I hope everyone enjoyed this, my last walk of the year and thanks to those that came along on this one and all the previous ones this year since we started at Lakeside Park in February. I’ve enjoyed your company.