BVCT trustee Chris has been negotiating the Trust’s involvement with the Community Rail Partnership (CRP) to find ways to encourage the use of railways as a sustainable way to explore our Valley. 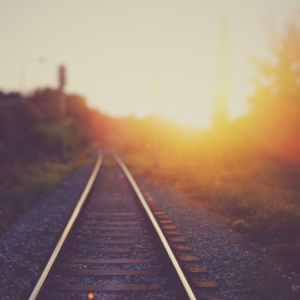 We are very lucky to have such wonderful countryside on our doorstep but have you considered exploring further along the 23 miles of wildlife corridor by train?

This is the principle behind our new and exciting Rail to Trail project – to show just how accessible the Blackwater Valley is by train and how easy it is for people to explore by combining the Blackwater path and the rail network.

What better way to get to know the Valley – all the health benefits but no car and no stress.

The Festival gave us a great opportunity to test out the idea – as part of a partnership project with CRP, we ran 3 Rail to Trail walks. The walk reports are below, from our leaders Colin and Chris.

We hope to share more news soon about our partnership with CRP and our new Rail to Trail signage project.

“We enjoyed joining the walk today, the weather held apart from a brief shower”

“A fantastic walk – we can’t wait for the next time” 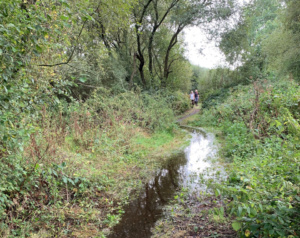 This was a super valley walk of just under 9.5 miles between the 2 stations. It was led by David Daniels of CRP and Colin Wilson from BVCT, and the route ran through some of the most striking scenery on the Blackwater Valley path.

Despite the enthusiasm of our newsletter editor, who, when bathed in sunshine before the Festival, predicted the same for the Festival, the weather deteriorated quite severely such that only a small party of walkers was bold enough to join us.

As it turned out, the weather was not so bad! Lunch was had in the dry at Sandhurst and only a few showers blotted the day.

For the two previous nights torrential rain had affected our route through Hawley Meadows where a solid multi user path is proposed to help in future but as you can see, wearing waterproof boots was definitely advisable!

The walk ended in good time, the train ride back to North Camp was exactly on time and on this occasion, free to our walkers due to CRP funding.

We all made some new friends, learnt new things, enjoyed good company and added to our fitness, exactly what walking is about!

Our thanks go to David Daniels of CRP for joining us.

Rail to Trail: a nature trail around Sandhurst 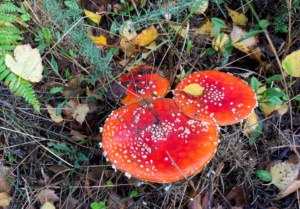 We set off from Sandhurst station, a brave small group having spotted that the rain would stop just as we started!

Passing through some very pleasant suburban streets we joined Wildmoor Heath for a circular route enjoying the heath and some good views from a carefully placed but tucked away seat overlooking the Valley.

Autumn colours were beginning to show and Trudi from Thames Basin Heaths Partnership gave us a short explanation about the valuable nature we could find there.

We failed to see any dartford warblers but we did find a rather unfortunate common lizard with a damaged tail and some nice fly agaric mushrooms. Chiffchaffs and nuthatches were heard as well as some of the expected tit flocks in the birch trees.

The walk route returned by the hidden gem of Snaprails Park before continuing south across Sandhurst Memorial Park to the River then followed the Blackwater Valley path back to the station.

This was a super, varied walk with lots to interest us. Our thanks again go to David Daniels of CRP and Trudi from TBH Partnership for joining us on such an unpromising day!

Rail to Trail: a circular walk from Ash

Chris hopped onto the 13.25 from Blackwater, 15 minutes and three stations later he arrived at Ash and joined up with seven fellow travellers wanting to see more of what the Valley had to offer.

This walk was led by David Daniels from CRP, ably assisted by our own guide and Valley expert Steve Bailey (Manager of the Blackwater Valley Countryside Partnership).

The walk took us from Ash Station to Ash Green Meadows, onto Tongham Woods via the Old Railway Path. We then picked up the Blackwater River footpath and along the Basingstoke Canal returning back to the station.